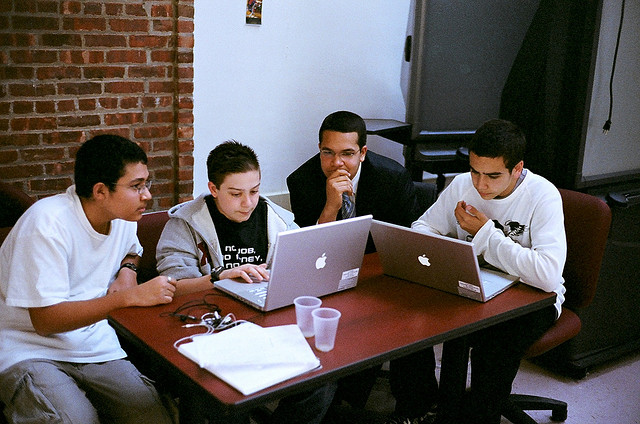 This post is the second in a two-part series highlighting key conversations from the April 3, 2014, Webinar titled, “CCSSO Innovation Lab Network: Transforming Teaching and Learning Through Competency Based Education” hosted by the International Association for K-12 Online Learning (iNACOL) and the Council of Chief State School Officials (CCSSO).

Lori Lodge, Curriculum Coordinator in RSU #57 in Waterboro, Maine, outlined the process of transitioning to a competency-based system in her district. Before undertaking the shift to a competency-based system, RSU #57 struggled to align their curriculum, instruction, assessment, and reporting to the needs of all learners and their proficiency goals.. The district began their systemic change by first attending a session at the Maine Department of Education (DOE) and learning about what the Re-Inventing Schools Coalition (RISC) in Alaska undertook to make their system more student-centered. After their DOE session, the district held a community forum in 2010 to hear feedback on their strategic plan, which they have continued to update every year.  Through the initial community forum, specific core beliefs were formed and are still used today to guide district leaders in decisions related to new projects, programming, staffing, etc. A parent advisory group that meets monthly was also formed from the forum. This group discusses implementation issues and concerns, as well as devises an understanding of the new transition from a parent’s point of view for broader dissemination. RSU #57 also partook in extensive staff, teacher, and student training throughout the past five years with assistance from RISC for the first couple of years.

Throughout RSU #57’s development they have interpreted their comprehensive system of learning (curriculum, instruction, and assessment) as follows:

Andrea Stewart, the District Gifted/Talented Coordinator at Muscatine High School in Muscatine, Iowa, discussed the approach Muscatine Community School District (MCSD) recently took when incorporating CBE into their schools.  In part due to recent legislative changes and the Iowa Common Core requirements, MCSD saw the last couple of years as the perfect time to restructure the way students learn. The district wanted to prepare students for life after high school, and decided a focus on life skills and development was just as important as a focus on content. In order to prepare students for the change that CBE would bring, the four guiding questions were implemented in every part of teaching, they include:

Stewart explained how MCSD took an approach of ‘standards-based’ rather than ‘standards-referenced’ when beginning their transition to a competency-based system so that their curriculum is based around the standards instead of referencing them.

Steward explained that Muscatine Community School District wanted the students to be more prepared for future classes based off the Common Core standards and that standards-based allows teachers to base their curriculum off the standards instead of referencing them like a check-list. MCSD has also identified the various barriers to a successful competency-based system and has made attempts to solve them. For example, a student’s behavioral problem of skipping school should not be reflected in his/her grades, which it is not in Muscatine’s new grading rubric. Muscatine also is keeping a ‘community mindset’ when discussing grading and the learning environment to be sure that students are growing within the new grading style, which is focused toward postsecondary preparation.

While MCSD’s implementation strategy differs from RSU #57, both aim to transform teaching and learning through competency-based education.

The third and final installment of this series focuses on how CBE is transforming assessment and accountability systems in schools. For the previous blog on the first webinar, Transforming Systems Through Policy, Practice, and Structure, please click here.